Ever wondered which is the best pair of scissors for the job? Expert and beginner embroiderers alike can find it difficult to find the correct tool to cut goldwork thread, the right shears for slicing fabric or even the best pair to get a clean cut on your thread. Take a look to find out more.

We all have a favourite pair of scissors, but it is a true saying that “a craftsman is only as good as his tools”. A good pair of scissors can make a difference to your finished piece; they can also make working so much easier. It is almost impossible to produce a beautiful, finished piece using a pair of blunt snippers. But where did scissors originate.

The earliest scissors known appeared around 3000 to 4000 years ago. They were spring scissors, much like old fashioned sheep shears. They were constructed of bronze using a flexible strip to hold the two blades together. The blades were squeezed together and sprung apart when released. I used these to clip dirty wool from fleeces once the sheep had been shorn – your hand gets tired very quickly.

By 100AD the Romans had invented pivoted bladed scissors, the direct ancestor of almost all modern scissors. William Whiteley and Sons (Sheffield)Ltd has been producing pivot action scissors since 1760, and is the oldest scissor company in the West. Robert Hinchcliffe, also of Sheffield produced the first pair of modern scissors made of steel.

Embroidery scissors are small with a sharp point, making them perfect for snipping threads and removing unwanted stitches. DON’T USE A STITCH RIPPER – they rip fabric as well. I know I’ve done it! 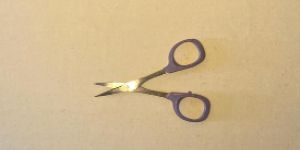 Curved scissors - Avoid the chance of damaging fabric whilst snipping threads. Use the scissors with the point away from the threads or fabric. These are my everyday go to pair

Angled scissors - Useful for getting into awkward corners. I don’t use these often, but they are invaluable when I need them. They are a really good option if you enjoy whitework. Shop around for Kai – prices vary depending on the supplier. The handles are not necessarily colour coded. 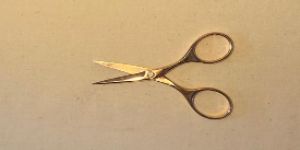 Straight scissors - A general working tool, ensure they are small, sharp and pointed. And take care - I dropped mine on the points, they were ruined. 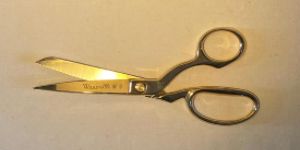 Cutting shears – Whiteley and Kai. Fabric scissors have blades with no serrations and a very sharp angle. They are sharper than paper scissors. Do not use them for paper or wool, they blunt the edges.

All purpose – Fiska. Use a good pair of all-purpose scissors for cutting paper patterns etc. 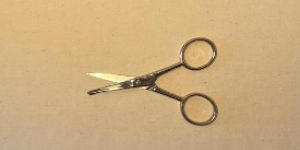 Applique - An offset handle and paddle-shaped blade pushes away the bottom layer of fabric, for controlled cuts close the stitching. Designed to cut/trim close to the fabric while protecting it from damage. Also useful for whitework. 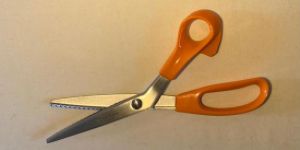 Pinking shears- For cutting cloth and producing a serrated edge so that the fabric does not fray. 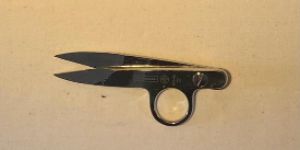 Snips - Small scissors without loopholes for the fingers, which have a fine tip, designed to get close to the fabric without damaging it. I don’t use them, but some people swear by them. 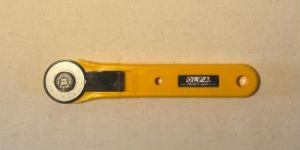 Rotary cutter- A rotary cutter is a steel blade which rotates when you push down and along a ruler or template. They can be quicker than scissors over a straight line but need a bit of practice to make a good job. 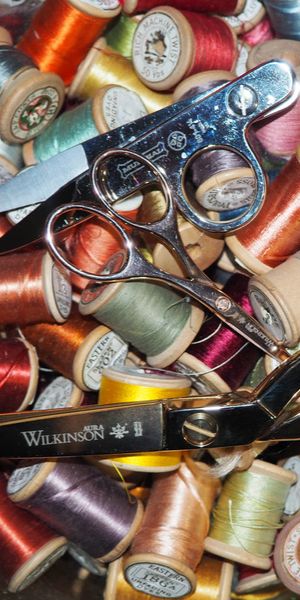 If you have an embroidery project in mind but need some help bringing it to life, contact me and we can discuss how I can help you with your designs and ideas!